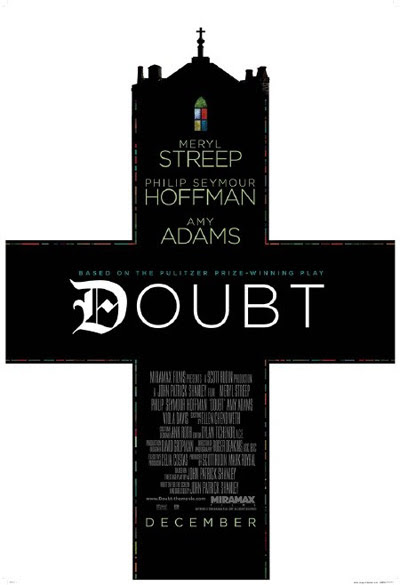 Wow! The seventh film I have watched from the "25 Films to Watch Before Oscar Night" is DOUBT. What a great film. It's based on the the Broadway play by John Patrick Stanley. He also translated it to the screen and directed the movie. This film will definitely receive multiple Oscar nominations. My prediction is based on my opinion and upon the various accolades it has already received.

Overall, the cast's acting was phenomenal. However, the standout and scene stealer is Viola Davis who plays Mrs. Miller. She's only on the screen for a mere 18 or so minutes, but it's definitely worth a nod for holding her own and going toe-to-toe with Meryl Streep in the outdoors walking scene to her place of employment. It was visibly cold the day of shooting and the scene is an emotionally charged one. Her emotions were so wrapped up in character that she didn't even bother to wipe her running nose throughout her dialogue. She just left it until the end. I thought it was genius. It may or may not have been a conscious act, but I don't think it really matters. The scene worked. She is GREAT! Check out the scene below.

Well, she did win the Tony for it.

Ahh! I didn't realize that. Well, she can add an Oscar to her mantle too!